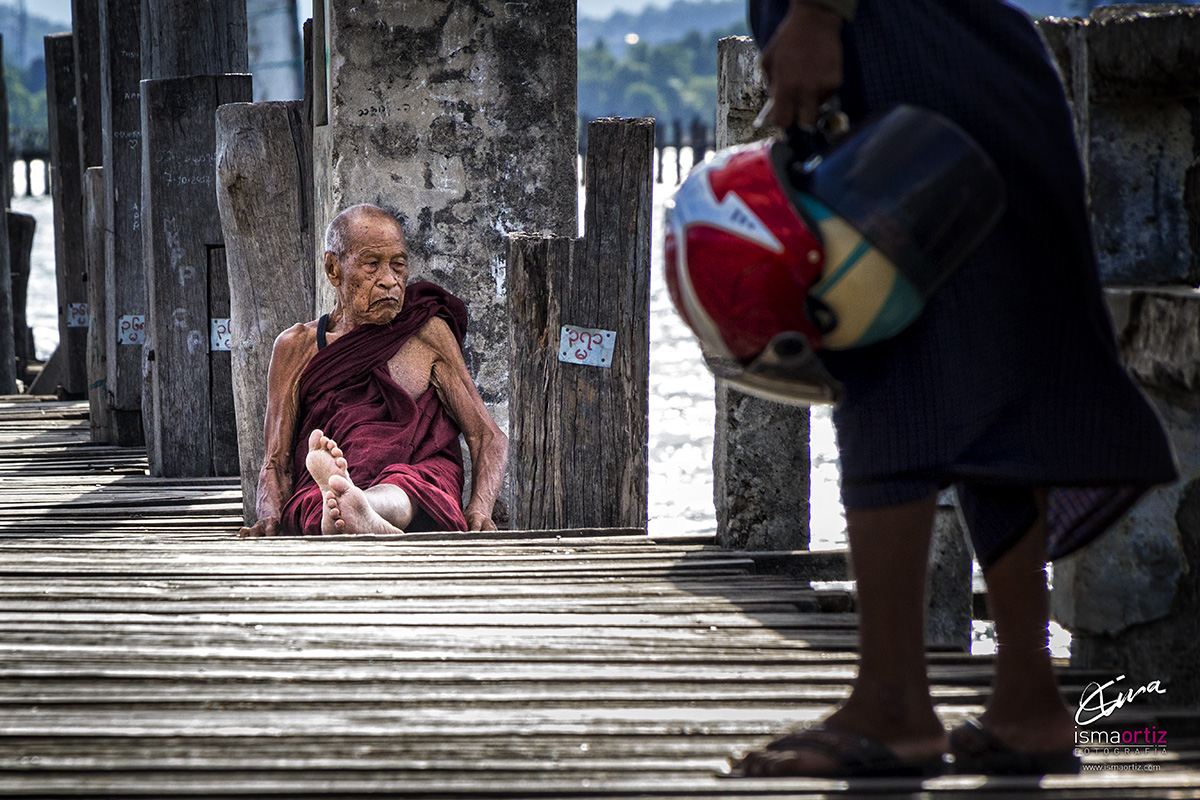 Isma Ortiz has been a freelance photographer for the past 25 years. Based in Madrid and specialising in documentary photography, Isma’s cross-border non-profit work covers Spain and other countries around the globe, both on private initiative or as part of a collaborative team. A graphic designer and visual storyteller by heart, his interplay of light, shadow, colour and emotion, take you on a soulful journey. Click HERE for Isma’s portfolio.

The sea breeze smelled of freedom to Khin Win as she carried her bucket of fruits and vegetable along the pier on her Daily Walk. Being cooped up in the small windowless room with 15 other people the whole day was stifling, especially when they had little light to see the clothes they were sewing. Each woman was chained to the table for 12 hours, forced to bend over the sewing machine in the dim light.

Each morning, the stack of cut out patterns were placed on their workstations, having been cut through the night by the previous team. The workflow was harsh and uninterrupted, the supervisors inhuman monsters with whips who went around inspecting the quality and precision of the stitching every 30 minutes. If you had bodily needs to take care of, you simply raised your hand and one of the guards would come around to unchain you and escort you personally to the toilets. Only three minutes were allowed per toilet visit, and a maximum of two toilet breaks per six hour shifts. Lunch was provided for by the employers, but it was only a 15-minute break, so the trick was to wolf the food down in five minutes, and lean back on the rickety plastic chairs for a nap. The women remained chained to one another during meals and while being transferred from the sleeping quarters in the basement to the working area. The concept of being able to walk around freely, even just to the garden for a breath of fresh air had long been buried and forgotten. Khin didn’t even remember what the wet grass or fresh plumerias smelled like anymore, and she would have given an arm and a leg to inhale the aroma of freshly harvested mangoes or the pungent scent of jackfruit.

Khin Win came from a humble farmer family whose ancestral roots were in Lowoxiang, neighbouring China. Her great grandfather had fled to then British Burma at the time, and first settled in Kangkung. Once he met the love of his life and their first son was born, the young family roamed the area with the other migrant labourers, finding jobs as carpenters or artisans along the way. According to family lore, Khin Win’s grandfather was able to save up enough money to buy a small plot of land near the N Mai Kha River and began trading in opium. The family did not like to speak much of grandfather, and immediately lit candles when his name was mentioned by accident.  She and four other girls had been kidnapped from the Chipwi area, a small mountain village in northern Myanmar, having been lured into town with promises of trading for call-centre jobs and additional data entry work for those who proved to be skilled enough. They were all between 14and 16, and didn’t know any better about the evils of the world or the false identities of gift-bearing strangers.

By the time the girls had woken up, they were gagged and bound, lying face down in a wooden box. The tea had been heavily laced with Rohypnol, masked by the sweetness, and they had all been fascinated by the sumptuous food laid out before them. Nobody had any sense of time, unaware they they had been kept drugged for 36 hours and transported down the river to Mandalay. The kidnappers had kept to the Aquatic Roads, knowing from experience that once the families noticed that the girls had vanished, they would send out search parties in all directions but on the regular roads. Once they reached Mandalay, the groggy foursome was thrown in the back of a small van and driven onwards to Nyaungshwe. It was here that Khin Win and companions met their fate and realised they had become slaves overnight.

Once the drugs had worn off three days after their arrival, the girls were sent to the showers, scrubbed down thoroughly and given fresh clothes and slippers, fed, vaccinated for TB and hepatitis, and hair inspected for lice. After the medical examination was over, each new girl was fitted with an ankle monitor, a device none of them had ever seen before nor understood. They did not even have sufficient understanding of the technology or exposure to the modern world to question the use of the device outside a prison. Yet, here they were, along with 300 other girls of varying ages, all locked up and wearing one. Khin Win had witnessed first hand what happened if anyone tried to escape, and she did not wish to meet the same fate as the slaughtered and disfigured body that had been put on display in the dining room during lunch time.

For the girls who were willing to take on additional chores and become the private sex slave to the guards, both male and female, the reward was to be sent out once a day to buy food and snacks. Khin Win had absolutely no qualms about the sex and the torture the came with it if it meant being out in the fresh air for an hour.

A few kilometres away, in a quiet monastery near Inle Lake, the monk Agga Sami fixed his robes as he sat down along the docks. He was neither tired nor hungry, but he had to collect the alms for the day, and give out some blessings to passers-by, keeping up the guise of a Warrior’s Serenity. Deep down he would much rather be swimming in the river, or perhaps even eating some noodles in the market, but those were undisciplined activities that were frowned upon, and he had to respect that. Observing the disciplined monastic lifestyle in Myanmar was not an issue, but it was certainly much more stringent than where he came from a year ago. No questions had been asked when the arrangements were made for him to join the isolated monastery, and it was a good thing that conversation was not particularly encouraged either. The less questions asked the better.

Agga Sami looked out onto the water. It was almost time for the boats to come out for their afternoon rounds, hoping to get lucky with the evening catch. It wasn’t the food he was after, but one boat in particular. The old Myint Thein had taken up his Inle Lake Fishing five years ago, finding it was the perfect cover for his activities. Nobody would think twice about a humble fisherman and a monk sitting quietly on a boat, and sometimes Myint Thein would even bring Agga Sami back to the monastery by boat, making a generous offering to the temple by way of buckets of fish and crabs. Standing up slowly and collecting his nondescript alms bowl, the monk made his way to the riverbank and got into the boat.

“Good afternoon Myint Thein, what offerings did the river provide today? I pray the light and good fortune were with you.”

The fisherman pushed up the red sleeves of his shirt, tilted his camouflage hat back and smiled broadly. “Always a pleasure to meet you Ethan. I have news from our friend Simon Roberge in Ghana.”