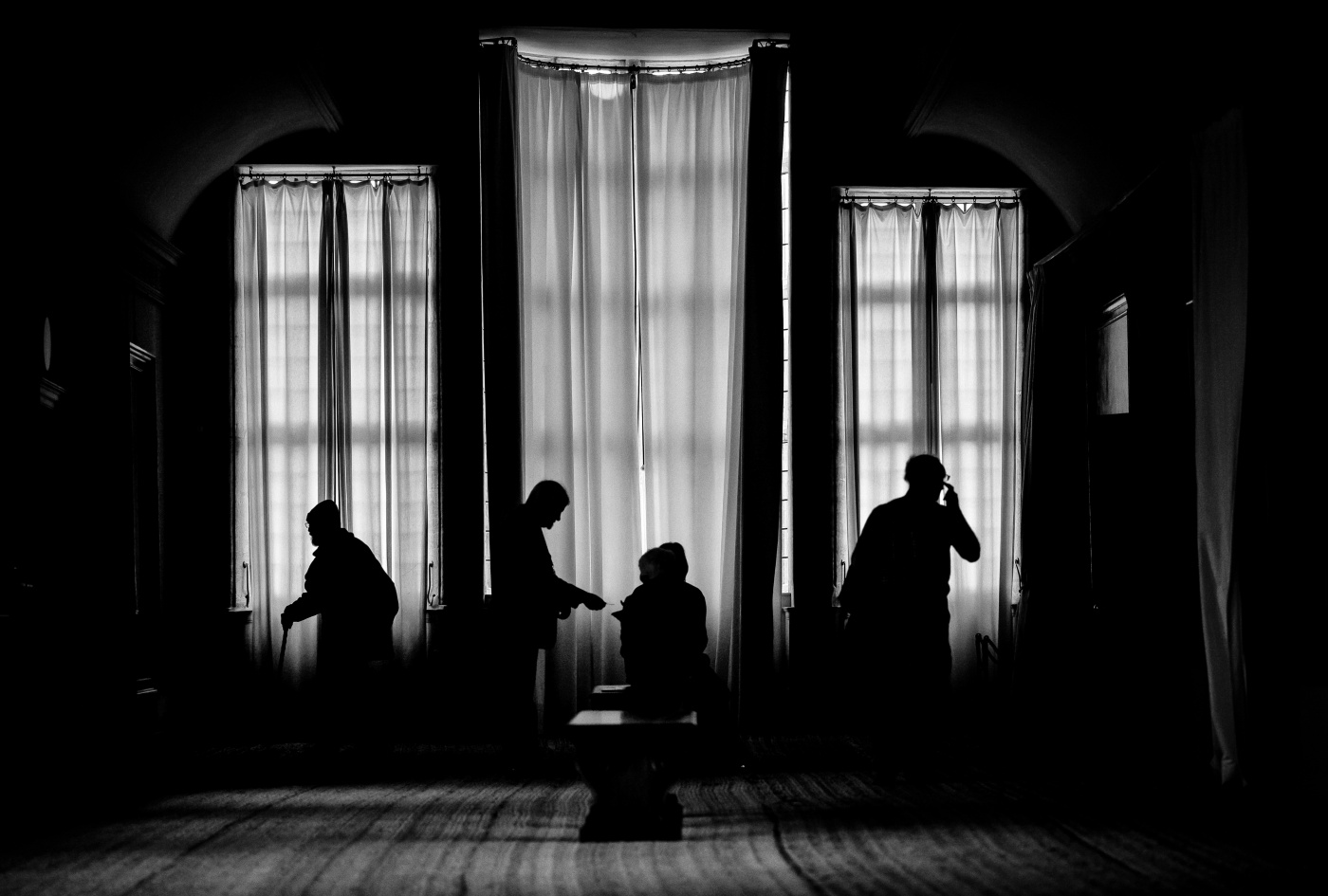 John Harper is a portrait, wedding and family photographer based in Wiltshire, UK with a passion for street photography. His signature poignant black and white photographs that always capture expression, emotion, and thought in a single image have a haunting beauty about them that leave a lasting impression, inviting you to return to the moment time and time again. Visit John Harper Photography to view more of his work and read the delightful Leica Biker Blog.

Ethan Morgan slumped back against his worn out wooden chair, crossed his legs over the corner of his desk and simply stared out the window. He was trying his very best to ignore the rain which seemed to intensify by the minute and focus on his novel but failing miserably. It was only 10:00 am and his fourth cup of coffee stood forlornly empty alongside the half-eaten breakfast and stack of unopened letters. The motivation to write had summarily walked out on him an hour ago, slamming the imaginary door of dedication and leaving him the dreaded writer’s limbo. Days like these were the ones he hated the most, especially with deadlines looming in the horizon and he was nowhere near producing anything viable for submission. His editor was going to have yet another mild heart attack and at least 20 more grey hairs, but that was not of any particular importance to him right now.

Possessing no clue about how to resolve the empty page glaring back at him from his laptop, Ethan decided to surf his social media once again in the hope that something or someone would trigger a magical storm of words and ideas. Five minutes later he slammed the laptop shut in utter frustration and began prowling around the kitchen. Moving to a small town was a huge mistake. He thought it would help him concentrate on writing the next novel, but the effect was exactly the opposite. The lack of audiovisual stimulation was the death of him as a writer, not to mention the absence of the high Society lifestyle he had grown accustomed to. The bright metropolitan lights, the hustle and bustle of corporate London during rush hour, the wide range of carnal pleasures that you could conjure with a single tap on your mobile phone. Damn! Out here in in Woodcutts, there was nothing but nature, nature, and more nature. The silence was deafening and it was driving him absolutely mad. Thank goodness that the cottage he rented came equipped with WiFi otherwise he would be suicidal by now.

The first week had been absolutely delightful, with days spent outdoors, taking long walks and unplugging from the toxic lifestyle he had been leading. By the second week he was already craving the all-night cafes, the glamorous Windows and greasy food at 3:00AM, or even just the sound of traffic. Now into his second month of isolation, Ethan was not just questioning the wisdom of the move but life in general. A mere three months ago he was CEO of a thriving business, a carefully conceived network that employed several hundred men all over the world to extort as much money possible from unsuspecting lonely hearts, divorcees, widows, or even powerful rich women who had risen to the top of the corporate ladder at the expense of their former lovers or ex-husbands. His employees were mostly young men between 20 and 35, spoke very good English and had watched enough international movies to understand what life was in the USA, Australia, and the UK in order to begin a conversation online and keep it up for a couple of months before the first monetary transactions.

Now in his mid 50s, Ethan had set up his pilot project in East Africa 15 years ago, training the boys in language, accents, psychology, and the basics of how to spot a vulnerable woman online and charm the daylights out of her. Fake accounts on all the social media platforms were set up, using stolen images of middle-aged western men, and carefully building up a fake background, employment, family history, and tragic story as to why he was single and looking for a wonderful woman to spend the rest of his life with. The most successful profiles were always the soldiers and doctors assigned to some remote war-ridden country who eventually need assistance with a plane ticket or payment for some obscure emergency. Getting the women to pay for and send new phones, tablets, laptops, and clothes was a piece of cake. They all fell for the sad story and were eager to meet their prince charming. Later on, the isolated oil rigger and civil engineer were added to the cast of characters, with the odd corporate executive for good measure. Ethan himself had managed at least 12 profiles at the time, keeping careful track of which identity he was using with which woman. Every once in a while he slipped and forgot whether he had a son or a daughter, was a widower or divorcee, but quickly recovered. His team was good, excellent, in fact, and he managed to amass sufficient funds to start setting up dummy websites, pay hackers to construct an intricate network of interconnected mirrored sites that looked completely legitimate to the inexperienced eye.

With the upscaled digitalisation of the modern world, Ethan’s business grew and the teams were able to find their marks outside of the dating sites and in business platforms, photo-sharing communities, in addition to the usual social media sites. It never cease to amaze him how many people were careless enough to share so much personal information online with total strangers Everyday. The online romance business was here to stay, but it also meant that the online romance scams had to be three steps ahead of everyone else, use a new level of sophistication in order to get the people to hand over their life savings, retirement funds, college funds of their children, or sometimes even dip into company accounts. Oh he was good at his game, especially now that there were so many options to grow the business.

In the midst of all this money earning and laundering, Ethan discovered his passion for writing. One of the women he had conned out of her retirement fund had been a literary agent who took one look at his first manuscript and got it published in no time. What a pity she had a complete mental breakdown and heart attack after she handed over all her money to Ethan (who was going by the name Jeremy at the time) and then skipped town without a trace.

The piercing sound of one of his mobile phones shook Ethan out of his day dreaming. He froze momentarily when he saw the name flashing on the screen but then grinned broadly. Ah yes, his new favourite sideline and recent conquest. This was a relatively new business venture he had invested in and was enjoying even more than the online scams. Being the suffering doctor in Yemen was getting tiring.

“Tell me when and where” he said as a greeting to Metro Kiss.

“Good morning to you too Xavier. Grab your gear and be in The Chamber within the hour.”

“Tell the good doctor I will do my worst to make him happy.”

The much-awaited sequel to Wings At Dawn follows Julian Lopez, Noel Rojas and Paolo Melendez across four countries as they track an international trafficking ring that lures unsuspecting trans women into an an evil web they cannot escape from on their own. The book is a culmination of six years of research in the Philippines, Thailand, and Germany.